The DAILY DOODLES plus a few more drawing series on Berlin and ...  will be shown in an upcoming solo show called "METROPOLITAN" at STRYCHNIN gallery BERLIN / late 2012. I will keep you posted - stay tuned.

Back home.
The DAILY DOODLES will soon be shown in different
art shows in Germany/Europe and Canada.
I'll keep you posted!

HEADING BACK TO MY BELOVED BERLIN!
BYE BYE TORONTO PEEPS, I WILL MISS YOU!


My last day in the Akincollective studio. Wow, that's quite intense. Even though I am happy to be in my beloved city of Berlin soon - I will definitely miss this place and my canadien friends a lot! But thank god or whom else for the internet. So we will definitely stay in touch!


Today was packed! Janine picked us up and drove us to Oakville where Kim had a nice gig with her Jazz band. Good music and a sun-shiny day right by the Lake Ontario. Nice.

After that we met Cliff back in Toronto. He showed us the indian market and some of his Little India. We had some delicious dinner together. Thanks, buddy!

So I went to the studio quite late today to do my DAYLY DOODLE and start packing my stuff... only two and a half days left before i leave back to Berlin...


Here's a Photo of some of my new friends from www.akincollective.com
Great peeps and fun studio mates. I really had/still have a great time with you folks. I'll miss you all!

Yesterday we went to Niagara Falls (second time for me) - constant rain!
My Mom and Anni arrived - so there is some tourist/holiday/stuff going on for my last week in Canada. Yes, my last week - time's flying and two months went by already!


My friend MAYA HAYUK from Brooklyn, New York has an art show at SHOW & TELL gallery, To. The opening was yesterday, packed, great and funny - and awesome art!

I am still a little hungover. Yes, we had a bunch of drinks!

I met friend and fellow artist DAVID IRVINE. Super funny guy! We had a great day talking art, music and funny shit. There will be some sweet art collaborations soon and he will also take part in the deerBLNproject groupshow. Yay!

I love the hard black & white contrast these days. I'll def. go back to shadings and some colors, no worries. But for now I keep it minimalistic!


For some reason there were some problems uploading images today.
I hope that is only temporary - spent about six hours yesterday to replace the images of the first four weeks here. Bummer - big time.

This day started horrible. I found out that for whatever reason the first whole month of the blog was MISSING / GONE ... all of a sudden ... no idea what happened. I only know, I didn't do anything. It was just gone.
Okay, so I spent the last 5 or 6 hours checking all my pictures and replacing images. Since I didn't write the exact dates on each drawing itself, some of these informations are gone. Well, at least the original DOODLES and the pictures I took are still there. I am done for today, literally. Busy Sunday!


Today's DAILY DOODLE is a black & white drawing of some famous corner at Kensington Market, Bellevue/Nassau.

Since it was my birthday yesterday I tried to spend it as lazy as possible. I went to the F.A.T. (Fashion. Art. Toronto.), an alternative Toronto Fashion Week / Show. Heidi Ackerman & Lindsey Sinclair showed their new collection. Great show! See some pics and click the link.

Thank you all so much for all the birthday wishes I got. I am truely overwhelmed by the number of messages, mails, and wishes I got. Whooow! THANKS!


Yesterday's artworks are about to dry again, since I put another very thick layer of varnish on'em. New pics soon.

So today's first DAILY DOODLE got some color again. It's another silo. I somehow love the rough beauty of those things. And down by the Lake (Ontario) there's quite a bunch of'em...


These are the two "silo drawings" from yesterday - in some kind of in-between-stage. Mounted on wood and some first layers of varnish on top. Gives'em a pretty glossy surface - super hard to take photos of. Well, at least it might give you an idea...

I love those silos. These are the black & white drawings - I will turn'em into something else. These are gonna be mounted on wood and I'll varnish'em and stuff... soon! I'd love to do that more - as I'd do in my Berlin studio - and not "only do drawings", but I gotta bring those babies home with me somehow.

Sunshine... Yes, finally! Chilled Easter Monday. Just having a coffee to start some doodeling. I love my life!

The weather just changed from 3°C to 22°C today (!!!). Finally sping. So I took a long bike ride, about three hours. Took tons of photographs. A lot of new stuff to draw, yay! 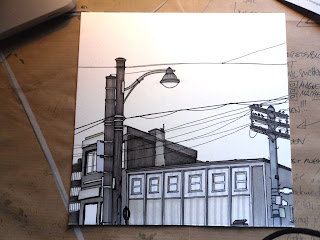 I went to Montreal for a couple of days. Friend and fellow artist Chris Dyer invited me to stay at his place. Awesome host! He showed me his city and we had some super fun skate sessions at the "BIG O" and right by the Olympic Stadium. Also some great miniramp session at a private skate loft. Thanks, bro!

From now on, I will draw DAILY DOODLES, yes - daily!


Bye bye Berlin. I just arrived to Toronto. Swapped places for 9 weeks.
Annette will join me the first five days. After that I will stay another two months by myself.

The flat here turns out way smaller than expected, maybe half as big and not comparable at all to what I've left in Berlin - bummer.

But hey, it's not for good - so I will deal with that - I actually have to anyways.